The folk artist Earl Cunningham (1893-1977) romanticized the American landscape without hyperbole. Cunningham didn’t suffuse his paintings with divine light or invoke manifest destiny, like the Hudson River School artists; he simply showed the many small interactions of the Atlantic coastal ecosystem — a delicate balance of dock workers, harbor pilots, fishermen, farmers, waterfowl and American Indian tribes. His landscapes are as sustainable as they are beautiful. 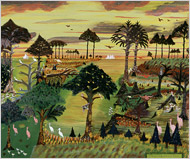 The Mennello Museum of American Art

“Sanctuary” 1934, by Earl Cunningham, with plovers, cranes, wood ducks and other fowl.

Organized by Virginia Mecklenburg, senior curator of the Smithsonian American Art Museum, “Earl Cunningham’s America” at the Lincoln Square branch of the American Folk Art Museum presents 50 of Cunningham’s cheerful, intensely colored paintings. While that number seems sizable in this small space, it represents only a fraction of Cunningham’s oeuvre; he painted more than 400 works, most of which are in the collection of the Mennello Museum of American Art in Orlando, Fla. Cunningham’s paintings have been frequently exhibited in galleries, but this is their first appearance in a New York museum since 1980.

Cunningham was born on a farm near Boothbay Harbor in Maine and died in St. Augustine, Fla., where he ran an art and antiques gallery. In between he peddled trinkets, operated an electric plant, raised chickens for the Army, sailed on cargo schooners, excavated Indian burial grounds and gathered coral.

At various stages of his peripatetic life he made paintings, beginning with small depictions of boats on cardboard that he sold for 50 cents. His works are often undated, and they typically combine incongruous elements: flamingos in Maine, Viking ships in Carolina harbors. Cunningham’s approach to painting did not change much over the years, but his travels up and down the Atlantic coast provided a constantly shifting backdrop.

His style may have been childlike, but he was hardly naïve. He was well aware of the “discovery” of folk art during the Depression (he is known to have clipped news articles about Grandma Moses) and marketed himself accordingly. He signed one of his paintings “Earl Cunningham, American Primitive” and printed business cards with the label “primitive artist.”

Later he exhibited his works in his St. Augustine curio shop but with a sign that read, “These paintings are not for sale.” Marilyn Mennello, Cunningham’s most devoted collector, recalled that when she first tried to purchase a painting, his response was, “Someone is going to come ’round here and buy all my paintings at one time for $40,000.” He seemed to be holding out for the big payday, although his lifestyle suggested that fame on the level of Grandma Moses was more of an incentive than money.

Cunningham’s art was modern and nostalgically American at a time when both traits were fashionable but rarely found in the same painting. His landscapes are characterized by a bird’s-eye perspective, flattened forms, doll-like figures and a palette often described as “fauve.” Sometimes, as in “Icy Harbor” (around 1940) and “Gathering Clouds Off Little River Inlet” (1962), they share affinities with the paintings of Charles Burchfield and Marsden Hartley.

“New England Autumn” (1928), one of Cunningham’s earliest works, shows that he was a natural with color. The grass is green, the sky and water are orange, and the trees are mostly bare, yet the scene registers as a crisp late-fall afternoon. Similarly, the strong diagonal thrust of the composition betrays a sophisticated eye.

Even when painted from memory, as most appear to be, Cunningham’s landscapes are informed by his maritime experience. Detailed boats — mainly schooners, along with Viking ships and American Indian canoes — appear in almost every painting. Even if (as the catalog notes) he sometimes fudged the locations of nautical markers, he paid careful attention to docks, marsh grasses and other features of the shoreline.

A seaman’s sensitivity to weather is also apparent. In “Blue Sail Fleet Returns” (after 1949) schooners with sky-blue sails traverse a saturated lavender ocean. “Red Sky Over Folly Beach, S.C.” (1975) evokes the old sailor’s adage “Red sky at night, sailor’s delight/ Red sky in morning, sailor’s warning.” (The time of day is not clear from the painting.) “The Big Storm” and “Hurricane” (both dated 1970, the year Hurricane Celia damaged the Gulf Coast) show rain lashing the water and trees bending at 90-degree angles.

Once settled in St. Augustine, Cunningham became increasingly interested in the Seminole Indians, then the subject of popular fascination and national media attention. In 1935 the interior secretary, Harold Ickes, traveled to Florida to try to negotiate an end to the tribe’s 100-year war with the government. Cunningham made several paintings of Seminole camps, in which tribe members fish, hunt and rest under thatched roofs.

Although not a skilled painter of the figure (his Seminoles bear a curious resemblance to Russian nesting dolls), Cunningham seems to have had more success with animals. The many species that inhabit paintings like “Sanctuary” (1934) reflect an interest in conservation that was as timely then as it is now. The Everglades were threatened by logging and a proposed barge canal connecting the Atlantic with the Gulf of Mexico. Plovers, cranes, wood ducks and other fowl dot the golden landscape of “Sanctuary,” which is reminiscent of Edward Hicks’s “Peaceable Kingdom.”

Whether you think of Cunningham as a folk artist or a Modernist, his paintings display an intuitive grace. They are the product of history, selective memory and a well-traveled life.

This site uses Akismet to reduce spam. Learn how your comment data is processed.